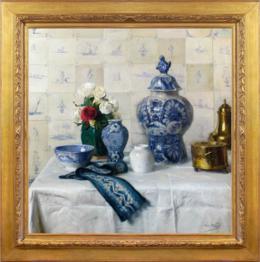 The first specifically European paintings are probably Minoan, since Palaeolithic art is common across the globe. These decorative, highly developed frescoes from Crete show priests and priestesses, bull-dancing, dolphins swimming amongst schools of fish, flowers, landscapes and animals. The impulse to depict everyday life is as old as the art of painting, but it extends beyond the mundane world to invoke the numinous, with scenes of ritual practice. Paintings in ancient Greece include figured vases, wall and panel paintings; the latter were the most highly-regarded, as we know from Pliny, although unfortunately none of them, nor later Roman panels, have survived. Both panel and wall paintings seem to have aimed at a very high degree of realism: trompe l’oeil was already a flourishing genre, and Pliny’s anecdotes about artists such as Apelles, Zeuxis and Parrhasius concern their ability to deceive the eye – the horses which neigh only when they see Apelles’s painted horses; the birds which try to eat Zeuxis’s grapes; the curtain by Parrhasius which Zeuxis tried to draw. Figure paintings were common, but the only surviving portraits we have decorate a group of 2nd century AD Roman mummy-cases from Fayum, Egypt.

European painting after the fall of Rome was a reaction from realism: although early Christian art continued in the Classical tradition, early Mediaeval art was concerned with teaching in clear, unambiguous images, uncomplicated by perspective, modelling in chiaroscuro or studied anatomic detail, so that these techniques gradually fell away. Mediaeval paintings were almost solely religious, and needed to convey stories and allegories to a mainly illiterate population, projecting them inside poorly-lighted churches and chapels. Thus altarpieces tended to contain holy figures (easily-recognizable by symbols or colours of robes) in a shallow space, not interacting with each other, and given status by their relative size.

The recovered study of perspective, drawing from the nude and en plein air, and use of light and shade to model form, were relearnt from Classical sources during the Renaissance. This began in Italy, or more specifically Florence, and diffused through the rest of Europe at a varying rate. In Spain, for example, the Mediaeval phase lasted longer than elsewhere, almost leaping the Renaissance to embrace Mannerism and the Baroque. In the Netherlands and Scandinavia, aspects of Gothic style also lasted for some time; although Flemish painting was advanced by the adoption of oil painting and was much more open to Renaissance techniques of heightened realism. The so-called High Renaissance was still centred in Italy, on the figures of Leonardo, Michelangelo, Raphael and Titian, whose work became a type of European painting manual in the advanced techniques of painterly representation. Subject was also important, since the Renaissance rediscovery of Classical texts – literary & philosophical – advanced ideas of humanism, and introduced other themes than the purely religious (portraiture, mythological and history paintings).

Art during the Renaissance was still idealized; this is true of all nationalities. The advent of the Baroque style focused on a greater and less-idealized naturalism: the centre of the art world moved from Florence to Rome (with Caravaggio and his school), and then to France. The great artists of the Baroque were Frenchmen such as Poussin, Claude, Philippe de Champaigne, & Georges de La Tour, the Netherlandish Rubens, Rembrandt, and Van Dyck (who redefined the art of portraiture in Britain), and the Spanish Velasquez. Their subjects were mythological and particularly, portraiture, as religious art began to lose its pre-eminent grasp of patronage. The theatrical tendencies of Baroque art played to the desire of monarchs in this period to emphasize their divine right of rule, and the portraits of the French kings and scions of the Holy Roman Empire in particular seemed to subsume some of the elaboration and symbolism previously reserved for altarpieces. The Rococo movement was a lighter, more frivolous version of the Baroque, and in terms of European painting was centred in France, where portraiture offset the sensuous depiction of costume – texture, colour, and decorative line – by a striking and percipient naturalism of likeness.

Landscape and marine painting had been growing in popularity from the 17th century; again, these developed at different rates in different countries – the Netherlands, whose influence as a small nation developed through their sea-borne power, were perhaps more adept earlier at marine art, later rivalled by the British. British artists were, from the later 18th century, masters of watercolour landscapes – as they were at a less theatrical version of Baroque portraiture than the style which flourished on the Continent. Although they had been less open to the Rococo style in general than some other nations, they were attuned to the Romantic movement, and both landscape and portrait painting flourished in this era, climaxing – for landscapes – in the towering figure of Turner.

During the 19th century artistic styles diffused more widely and rapidly than ever before, as travel became easier and more mechanized. Paris might still be the artistic centre of the world, but although the original Impressionists were all Parisians, they had an almost immediate and wide-ranging influence on artists of other nationalities. Amongst the Post-Impressionists and Symbolists were the Dutch Van Gogh, the Belgian Angrand, Khnopff and Van Rysselberghe, the Swiss Hodler, the German Stuck, the Austrian Klimt and the Italian Segantini. Genres of painting similarly became more homogenous; work on a domestic scale and often concerned with domestic subjects replaced the large-scale religious and political paintings of earlier eras. In the 20th century, Cubism, Dadaism and Surrealism were all still rooted in Paris; however, some of the main figures involved in these movements were Picasso and Dalí (Spanish), Ernst (German), and Magritte (Belgian).