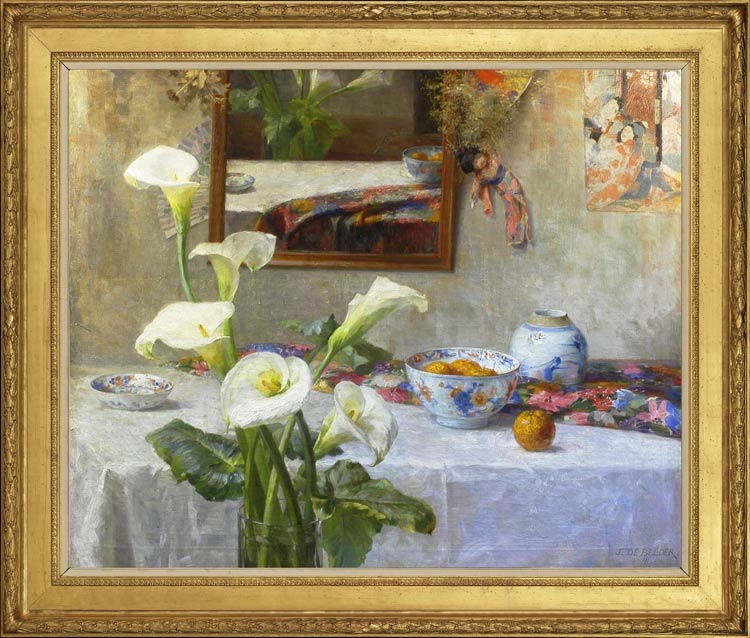 Oil painting became the most common technique in Europe from the 15th century, although it had been known and used earlier, in Afghanistan. Knowledge of its means and method may have been imported to the west along with lapis lazuli, the raw material for ultramarine paint, which was considered one of the most perfect of colours for its rarity and saturation. Before the 15th century, paint had been bound in media such as egg yolk and vinegar (tempera for European wall frescoes), egg white, gum or animal glue (for illuminated manuscripts), and egg or resin (for Egyptian tomb paintings). All these vehicles created a relatively hard-wearing surface, but once applied they could not be removed, so mistakes were difficult to repair; also fresco painting (onto as much wet plaster as would take a day to paint) was slow as well as unforgiving.

Oil paint is much easier to use in this respect, since it can be scraped off without harming the support; the oils used as a vehicle also render the pigments glossier, more transparent and intense than egg tempera (which is the reason frescoes tend to look chalky and matte in comparison with oil paintings). Whether the technique was imported from Afghanistan or discovered independently, it seems to have been in use in Europe from around the 12th century for polychrome sculpture; the reason for so long a time lapse before it was employed for oil paintings on panel is a mystery. The Van Eyck brothers, Hubert (d. 1426) and Jan (c.1390 to c. 1441), were the first to use it so innovatively and with such brilliant results that Jan was mistakenly credited in several later texts with having invented the process.

The recipe is analogous to salad dressing, in that oil is mixed with a fermented or distilled liquid; in the case of oil paint, the medium is an oil such as linseed (commonly), poppy or walnut, mixed with distilled turpentine in various proportions (if overpainting in layers, more oil is used proportionately in successive layers). The more oil, the longer the paint takes to dry, and the glossier and more flexible it will be; the more turps, the quicker it dries, but the more brittle and matte the finish. Use of oil paints also opened the door to painting on a canvas support, which was more stable and versatile than the wooden panels which had been in use since the 12th century or earlier.

Panels (mainly of oak in the north and poplar in Italy) were tricky to create on a large scale, as they had to be joined in such a way that they could not move apart and crack the gesso surface, an almost impossible aim, since wood flexes, expands and contracts under climatic changes. Canvas could be removed from its wooden stretcher after painting and rolled carefully, making the finished work much easier to transport. The earliest surviving instance of an oil painting on canvas seems to be a Madonna and Child adored by angels by the Netherlandish artist Jean Malouel (c.1370-1415), in the Gemäldegalerie, Berlin; it dates from about 1410, and is relatively large (421.1 x 31.9 ins; 107 x 81 cm).

Both canvas and panels were painstakingly prepared; they were covered with layer after layer of finely-ground gesso powder (chalk or gypsum) mixed with animal size, and sanded down between layers when dry, until a thick smooth shell like ivory was created. All texture was excised from the ground until as late as the 19th century. Copper plates were also used for small works, again being prepared for use with a layer of gesso or lead white; these had an extremely smooth surface, and gave an effect like an enamel to the painting.

Historically, pigments for paints were made from earths (yellow ochre, siena and burnt siena, umber and burnt umber, red ochre, terra verde, &c.), from plants and organic materials (madder & lake colours, saffron, indigo, sap green, ivory black, Tyrian purple), and from minerals (Naples yellow, vermilion, ultramarine, Prussian blue, verdigris, lead white). Some of these were impermanent or discoloured in mixture or under light, which is why they are rarely available since the coming of more permanent organic and chemical colours. The early pigments were prepared (ground, sifted and mixed with a medium) in the individual artists’ studios, and this process endured even after the coming of commercially-available paints, prepared by artists’ colourmen from around the 1630s. This was because artists liked to keep a strict control of pigments which might be diluted by unscrupulous merchants, leading to greater tendencies to discolouration and impermanence. As late as the second half of the 19th century, Holman Hunt was complaining about such practices, which caused the flesh tints he was using in his oil paintings to blacken very quickly. This was still a period of great innovation and change, however; Viridian green, for instance, was only patented in 1859, creating a pure, strong blueish green which immediately began to change the appearance of landscape painting. Sir George Beaumont had previously held that a landscape should be ‘the colour of an old Cremona fiddle’, principally because the original greens in Old Master paintings had faded and discoloured to a series of khakis, olives and browns.